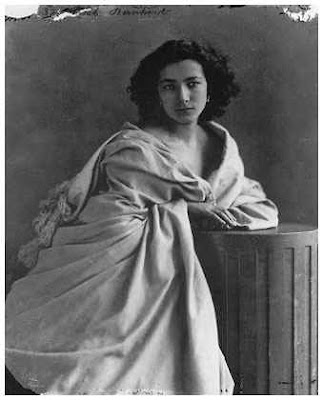 Sarah Bernhardt - (October 22, 1844 - March 26, 1923) was a French stage actress, and has been referred to as "the most famous actress in the history of the world". In 1905, while performing in Victorien Sardou's La Tosca in Rio deJaneiro, Bernhardt injured her right knee during the final scene which required her to leap from a high wall. The leg never healed properly. By 1915, gangrene had set in and her entire right leg was amputated, confining her to a wheelchair for several months. She continued her career, and contrary to belief, without the use of a wooden prosthetic limb. Her physical condition confined her practically to immobility on the stage, but the charm of her voice, which had altered little with age, ensured her triumphs.
Posted by Mark Warren

Email ThisBlogThis!Share to TwitterShare to FacebookShare to Pinterest
Labels: Amputees